MPHA Board approves recommendation of Gregory P. Russ as next Executive Director/CEO

Previous Next
MPHA Board approves recommendation of Gregory P. Russ as next Executive Director/CEO

Selection moves to Minneapolis City Council for confirmation in December

The Minneapolis Public Housing Authority (MPHA) Board of Commissioners has voted to approve the recommendation that Gregory Russ become MPHA’s next Executive Director/CEO. Russ would assume leadership of the agency following the February 2017 retirement of current Executive Director/CEO Cora McCorvey. Commissioners made the unanimous decision at their regular monthly board meeting on November 16. The appointment is subject to confirmation by the Minneapolis City Council.

Mr. Russ is currently Executive Director of the Cambridge (Massachusetts) Housing Authority. He brings more than three decades of experience to MPHA, including work at the Chicago and Philadelphia housing authorities and at the U.S. Department of Housing and Urban Development. Among other industry leadership experience, he is a past president of the Public Housing Authority Directors Association. 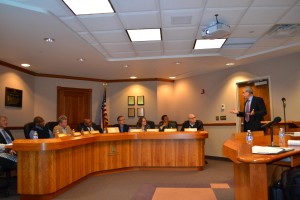 Greg Russ speaks to the MPHA Board of Commissioners on Nov. 16 prior to his approval by the board.

“It is really a privilege to have this opportunity,” Russ told the board. “Thank you so much, and I look forward to working with everyone.”

In making the decision, Commissioners acknowledged the “legacy of excellence” that current Executive Director McCorvey has established in her 25 years as the MPHA’s first and only leader to-date. If confirmed, Mr. Russ would likely begin his transition at the MPHA in early January, taking over from Ms. McCorvey following her February 10, 2017 retirement.

“I believe that Greg Russ will be a great leader,” McCorvey told the board. “His demeanor, his passion, and his expertise in his field have not gone unnoticed by me and others around the country. Greg and I will work together closely to make sure that the transition is a smooth one.”

Mr. Russ will be unavailable for interviews until confirmed by the Minneapolis City Council.

About the Author: Jeff Horwich

Jeff Horwich is the Director of Policy and External Affairs for the Minneapolis Public Housing Authority.