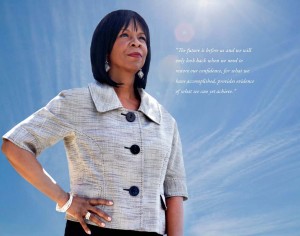 After 44 years of its ancestor agencies, The Minneapolis Public Housing Authority became an independent city agency in 1991 with Executive Director, Cora McCorvey at the helm.  MPHA implemented new programs and initiatives that still thrive today to improve housing quality, preservation and choices for a diverse population.

The landmark Hollman federal housing lawsuit was filed against MPHA and other agencies, a settlement was reached and mandated responsibilities were fulfilled.

MPHA celebrates its 20th Anniversary as an independent agency with staff, partners and residents.

MPHA receives $18.2 million from HUD in a formula grant and successfully competed for an additional $31.8 million for targeted projects for a total of $50 million in American Recovery and Reinvestment Act funds.

MPHA was awarded a $14.2 million HOPE VI program grant from HUD and responding to the needs of the elderly, MPHA created Heritage Commons at Pond’s Edge using advanced green technologies and eco-friendly materials. The facility features 102 apartments, an assisted living program on site, a resident-operated Sunshine Shop convenience store and several other amenities.

Heritage Park opens with 500 new homes including public housing, market-rate rental units as well as houses for sale. With the downtown Minneapolis skyway looming behind it, Heritage Park became a city jewel in neighborhood living and a community reinventing itself.

MPHA developed a new program, ‘Moving Home’ that allowed families to use their Section 8 assistance toward the purchase of a home. 192 families have purchased homes under MPHA’s homeownership programs.

In a move that would literally change the landscape of public housing, parties to the Hollman vs. Cisneros lawsuit reached a landmark settlement that would bring more than $100 million to Minneapolis to replace decades-old, deteriorating housing with new home and new communities for families to live.

MPHA’s Board of Commissioners unanimously approved the agency’s first-ever elderly housing plan. MPHA was one of the first two housing authorities in the country to do so.

In October 1992, the agency celebrated the opening of Signe Burckhardt Manor as the first public housing assisted living center in Minneapolis and the State of Minnesota.

MPHA becomes an independent agency. Cora McCorvey became agency’s first woman and African-American executive director. The agency faced incredible challenges. HUD had rated the agency as “At Risk”. MPHA transformed itself in the following years to become one of the nation’s premier public housing authorities.

Nearly 35 years after former Mayor Hubert Humphrey and the city council launched MHRA, in 1981, Mayor Donald Fraser and the City Council merged the organization with Minneapolis Industrial Development Commissioner to form a new agency for the modern time – the Minneapolis Community Development Agency (MCDA). Then in 1986, the City appointed the first public housing board of commissioners to govern the department established as the Minneapolis Public Housing Authority.

An epoch time climaxed with the dust settling from 15 years of building highrise apartment facilities that spanned the community. The family housing landscape showed the most dramatic expansion ever. Hundreds of new scatter-site homes were developed through acquisition and rehab. In 1974, MHRA jumped to the forefront among the housing authorities in the nation to introduce a Section 8 rental assistance program.

Public Housing construction leaped upwards again over the next 10 years, this time evolving into the creation of apartment homes for low-income adults in 28 highrise apartment buildings in neighborhoods across the city by decade’s end, Minnesota Senator Hubert Humphrey advocated strongly in Washington, D.C. for federal funds to fuel this new direction in public housing development and many locals tagged his name to the overall effort. President Lyndon Johnson and Congress consolidated all federally-subsidized housing programs under a new executive level cabinet department in Washington, the Department of Housing & Urban Development.

MHRA constructed 184 units creating the Glendale community in the Prospect Park Neighborhood near the University of Minnesota and some 40 years later, Glendale became the city’s first and only public housing development to also be home to an Early Childhood Family Development Center (Head Start), built by MPHA in 1995.

The Minnesota State Legislature adopted the Municipal Housing & Redevelopment Act in 1947 enabling local jurisdictions to establish their own public housing and community development agencies to own and operate public housing. Months later, Mayor Hubert H. Humphrey did just that, creating the Minneapolis Housing and Redevelopment Authority (MHRA) and appointing its first board of commissioners.

President Franklin Roosevelt signed the U.S. Housing Act in 1937, creating the concept of constructing federal public housing as a cornerstone to his “New Deal” program to hasten economic recovery nationwide. In Minneapolis this new program took root in Sumner Field Homes, the first public housing development in the city and state.
Translate »
X